(OIL CITY, PA)  -  Twenty-two films, from around the globe, screened at the first annual Oil Valley Fim Festival on September 1-3.  The festival comprised competitive sections for American and international narrative films, both feature-length and short, and a curated block of out-of-competition selections. Audience favorites in feature and short categories, as voted on by the attending audiences, receivde prizes separate from jury prizes.

Festival Director Matt Croyle was thrilled with the turnout. "I'm happy to see such an interest in our area for something of this nature. We're the first international film festival in the Oil Region, and I think that's something special," Croyle said. "The quality of films we received, films from twelve different countries on five continents, was outstanding. We're looking forward to next year, as we're already receiving submissions."

The Oil Valley Film Festival is presented by and in partnership with Videomaker Magazine, Writers Store, MaddyG TV, Oil City Library, Oil City Civic Center, and Bridge Builders Communtiy Foundations. A special thanks is given to Arts Oil City, the Oil City Main Street Program, and the Venango Area Chamber of Commerce.

The following juried winners were announced on day three of the festival: 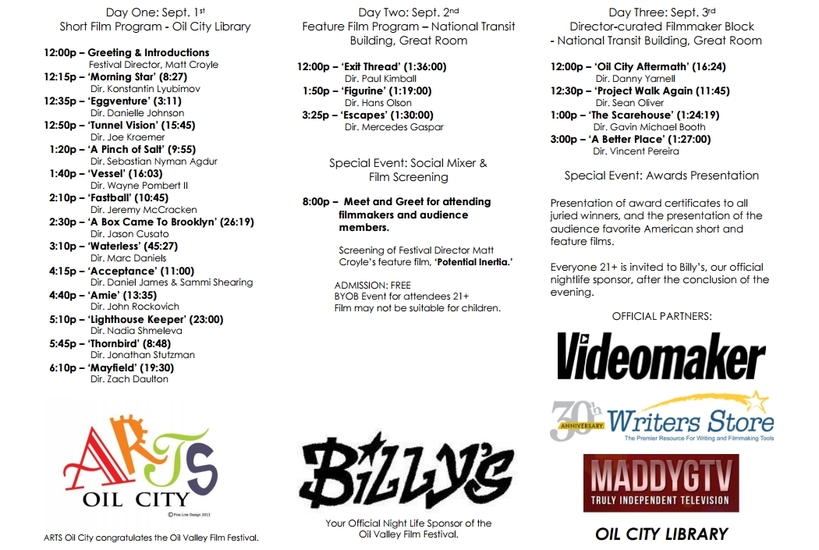 Short Screenplay Finalists:
"From Nowhere" by Joshua Carr
"Deadhorse Lick" by Charles Hall
"Pets" by Samantha Kolesnik
"But I Will Still Go On Loving You" by Kristian Van der Heyden
"Roll a Seven Go to Heaven" by Jas Shenstone